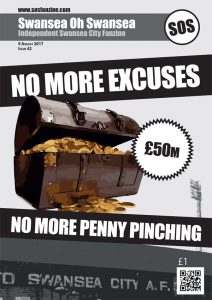 The 42nd edition of Swansea Oh Swansea hits the streets ahead of Alan Tate’s testimonial this evening.

Swans news – We discuss some of the major talking points of the summer including the retirement on Michu, new arrivals and players who’ve departed as well as the fact that train maintenance will affect travel plans over the next few months.

The age of the super rich – Guto Llewelyn looks at how the transfer market has gone mad with reference to the Gylfi Sigurdsson saga.

The Class of 2017/18 – We assess how the squad is shaping up ahead of the big kick off and look at where we need to strengthen.

My run is over – Our editor discusses missing his first home league game for over a decade when Everton visited late last season.

A tribute to Alan Tate – We pay homage to a true Swansea City legend as he finally gets a well-earned testimonial.

Time to stick the boot in – Nigel Davies offers some thought son whether the Swans should start a boot room culture at the club similar to the one Liverpool had in the 70’s and 80’s.

The games that kept us up – We look at the crucial moments of last season and pick out the six games that turned out to be the most important for the club.

When squad numbers make no sense – Steven Carroll discusses one of his footballing pet hates with reference to some of the strange numbers chosen by Swans players down the years.

Keith Haynes – Our regular columnist returns with a passage from his book “Shine on Swansea City” when the Swans secured their first ever Premier League away win at Villa in 2012.

Swansea Seasons – This time it’s the 2009/10 campaign under the spotlight as the Swans look to push on under new boss Paulo Sousa after the departure of Roberto Martinez.

Top fives – With Michu retiring we decided the time was right to relive our favourite five goals from his time in south Wales.

SoS will be on sale from the crossing by Rossi’s and from the path by Frankie and Benny’s from around 5:45pm before Tate’s testimonial, as well as Slee Stores Plasmarl and Sandfields, the Travel Club pod and Good News Swansea Market for the bargain price of £1.